You are here: Home / Our Work / Meditation in Denton 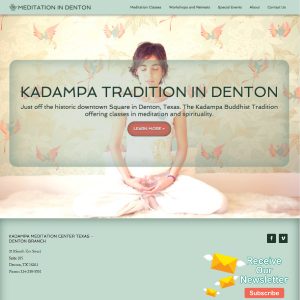 MeditationInDenton.Org is the website for the Denton Branch of the Kadampa Meditation Center of Texas. KMC Texas is part of the New Kadampa Tradition-International Kadampa Buddhist Union which has over 1200 centers and branches worldwide.

The Denton Branch hosts three meditation classes per week and monthly full-day or half-day classes and works closely with the Dallas temple and encourages attendance at similar or larger gatherings throughout the year at locations in Texas, the United States, and throughout the world.

Websentia offers Font Services using the state of the industry software from Fontlab, LTD. We use Fontlab Studio, Fontographer, TransType, and ScanFont. We can work from your design criteria or from … END_OF_DOCUMENT_TOKEN_TO_BE_REPLACED

What is Responsive Design? Responsive means that the layout and styling of a website adjusts to consider the screen size of the computer or device that is viewing the web page. The goal is to make the … END_OF_DOCUMENT_TOKEN_TO_BE_REPLACED

Websentia Web Services is based in the North Texas Area. While we provide digital services for clients around the world, the majority of our client relationships are based on local contact as this oftentimes is of greater value than long distance communications via email, phone, or video conferencing.

Our physical location is in Denton, Texas.